Tomorrow we depart early for Miami to board the Seabourn Quest for a 79 day voyage around South America, departing on January 6 and returning on March 26, back to Miami.

This long voyage has a lot of prerequisites, such as advance baggage shipping, Covid-19 testing, shore excursion planning, ordering of Antarctic outerwear, etc.  Packing for all four seasons, including the Amazon, can be a challenge, hence the advance shipping of luggage with waterproof boots for wet landings, snorkeling gear for the tropics, trekking poles for hikes ashore, hiking shoes, and formal wear for evenings on board the ship as well as casual wear for days at sea.

Today was spent on last minute preparations, including haircuts, Covid-19 testing, final house cleaning and shutdown, clearing out the refrigerator, preparing cars with trickle chargers and phone calls to family.  We tested negative at the Bellevue College test site, so we are good to board the ship.

We will also try a get a few hours of sleep before the car arrives at 0400 for our transfer to the airport.

The alarm rudely woke us at 0300 and before long the BMW 7 series was in front of the house as we set the alarm, turned off the water heater, turned down the furnace and put our bags in the car.  At 0400 there was little traffic going to the airport and by 0445 we were checked in and through security, waiting for the Alaska Airlines lounge to open at 0500.  The lounge is on the way to Gate D11, where we will board an American Airlines flight to Dallas, connecting to another flight to Miami.  We arrive late and are staying at the Four Seasons hotel for two nights so we can attend a gala dinner the night before embarkation for those guest going on the complete 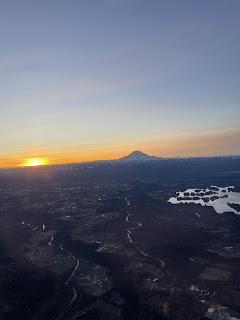 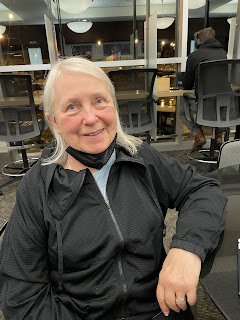 The American Airlines flight from SEA to Dallas left on time and the predicted flight time was 3:08 hours instead of the scheduled 3:59.  Taking off pre-dawn to the south we had a magnificent view of Mount Rainier as the sun rose above the horizon.  We were warned by the captain of possible turbulence over the Rockies and he was correct.  Meal service was not started until 90 minutes into the flight.  We had pre-ordered our breakfast, but what arrived was nearly inedible.  We think it had been in the warming ovens too long.

Arriving at Dallas, the wheelchair situation was strange.  Miriam was shuttled from the door of the aircraft to the gate area and had to wait while all the other wheelchair passengers were brought out of the plane and then all were loaded onto a vehicle.  Patrick just walked to the Admiral’s Club lounge and waited for Miriam.  We spent about two hours in the lounge, nervous about whether our flight was going to be cancelled due to weather like most of the other Florida bound flights.  The lines at customer service were very long as a result and it took more than 30 minutes just to arrange a wheelchair from the lounge to the gate.  Again, it was a multi-passenger tram and we arrived at the gate far too early.  Miriam was a trooper and stood for nearly 30 minutes before a wheelchair arrived to transport Miriam to the door of the Boeing 787.  Miriam was the first passenger on board and walked to the front of the aircraft to the lay-flat bed/seat, since we boarded the aircraft at door 2 in the middle of the aircraft.  By this time we were both pretty tired and closed our eyes.  Surprisingly, the full flight departed early and one could not even tell when we were airborne.  The business class seats were arranged in a herringbone fashion, slightly offset, so I could only see Miriam’s left leg for the 2:30 minute flight to Miami at a cruising altitude of 39,000 feet.

Service started quickly, with hot mixed nuts and drinks. That was followed by a meal, where Miriam had a vegetarian lasagna and Patrick had a Charcuterie plate, both very acceptable, especially compared to the previous flight’s breakfast service. 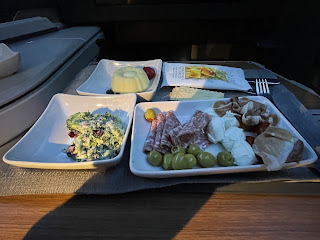 We arrived slightly early to Miami, the wheelchair was waiting at the aircraft door and then we cooled our heels along with all the other passengers for 45 minutes for the baggage carousel to start.  We were not worried about the bags making it to Miami since the Apple AirTags worked well and we knew the bags were in the terminal.  The Seabourn representative was waiting for us and when the luggage arrived called for the private minivan.  It was a smooth but slow process.  The trip to the hotel was also slow due to traffic and construction detours, so it was nearly 10PM local time when we arrived at the hotel.  The restaurants were closed but the lobby bar had small plates, so we went there and had a burger before checking out our room and getting some much needed sleep.  Long Day!!