Santorini, Spetses and return to Seattle

We had hoped for a spectacular sunrise over the caldera at Santorini, but the weather gods had other ideas.  The top of the caldera was shrouded in clouds and fog, still impressive, but not what we had hoped for.  Seabourn Encore was joined by only one other cruise ship, the Azamara Quest.  We were transferred to local tenders for the trip to the ferry terminal where we met buses that took us to the top of the caldera on a narrow winding road for a ride to the east end of the island.  We arrived at the ruins at Akrotiri, which date back to at least 5000 BC and have layers of different cities built on top of each other, like Troy, but fewer layers.  The ruins are protected by a roof system and raised walkways around the different layers and areas, different than when we visited 14 years ago. 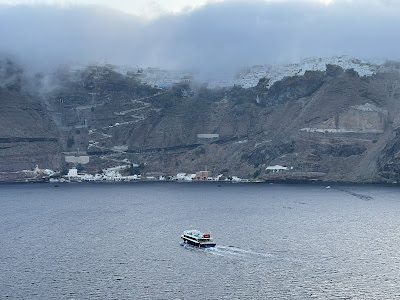 Clouds spilling over the caldera at Santorini 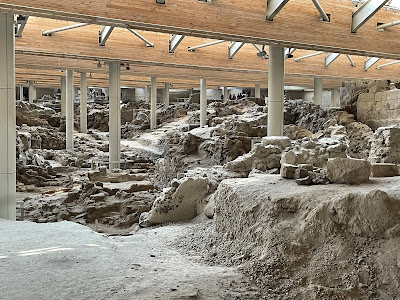 Some of the covered ruins at Akrotiri

After that visit, we went to the other end of the island to the town of Oia, with the famous blue roofed chapels and whitewashed building perched on the rim.  Even with only two ships is, it was crowded and by now, the clouds had burned off and it was HOT.  Miriam and I had a lite lunch while waiting for the rest of the tour group, since the steep rough streets and steps were just not doable with a walker.  We finally just abandoned the tour and took a taxi back to Fira, the central town.  The taxi driver dropped us off as close to the gondola as possible, where we found a taverna with a spectacular view across the caldera, including our cruise ship.  We enjoyed some Tzatziki and local white wine while waiting for the rest of the crew to arrive from the tour. 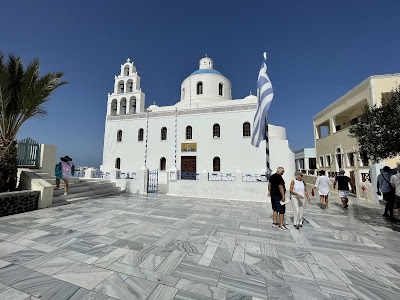 When the others arrived, everyone agreed it was time to return to the ship so we walked across the street to the gondola which took us to the bottom of the steep volcanic cliffs where we boarded a tender for the return to the ship.

The island of Spetses is south of Athens and is considered by some to be the Monaco of Greece, since many wealthy Athenians have summer places and the small town center is filled with high end shops.  The are many beaches, including one right in the main town, so Patrick tried out the water, which was cooler than in Skiathos.  The town was buzzing with mopeds and horse drawn carriages since no autos, except for delivery vehicles are allowed in the town center in the morning.  The group found an open air taverna and we sampled local Greek dishes while watching the people go by. 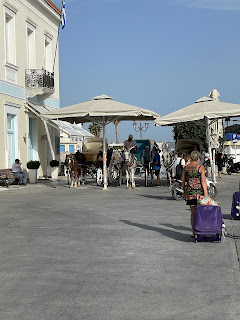 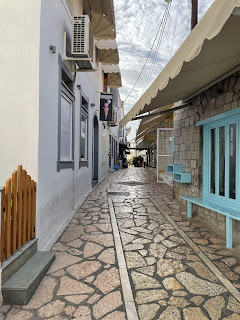 Pedestrian only shopping streets in Spetses 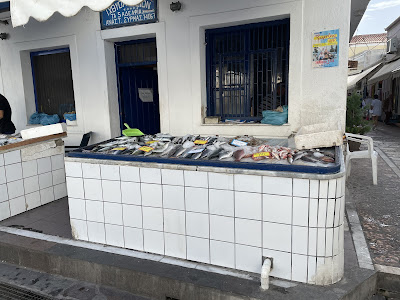 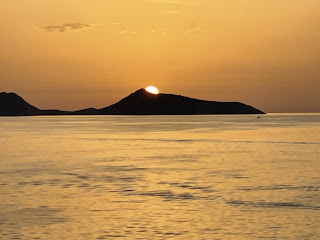 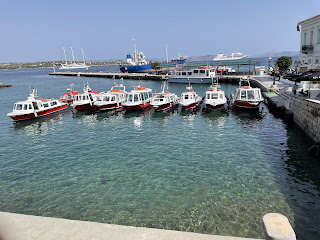 Our disembarkation was delayed for a few hours since central Athens, where our hotel was located, was the start and finish for the Run/Walk for the Cure for Breast Cancer, and many of the roads were closed to traffic.  We finally left the ship about 1:00 PM and checked into the Grand Bretagne Hotel across from the parliament building.  After a quick trip to the Plaka for some last minute shopping the group gathered for a farewell dinner at the Grand Bretagne rooftop restaurant with stunning views of the Acropolis as the sun set and the Acropolis lights came on. 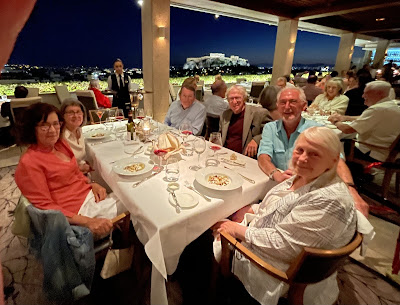 Our farewell dinner in Athens with the Acropolis in the background

Our car and driver were scheduled for 0715 in the morning, so we had just time for a quick bite to eat on the rooftop of the hotel before heading for the airport.  Traffic was heavy in the city, but smoothed out when we got to the toll motorway.  Check-in was fairly smooth, except they would not allow Miriam’s walker except as checked baggage, which turned out to be a little bit of a hassle since we had placed her cane in our checked luggage.  British Airways arranged a wheelchair transfer to the spartan business class lounge which British Airways shares with several other airlines.  Miriam and I then had a private lift bus to the plane and we both entered through the forward galley door. The flight to London Heathrow was expected to take 4 hours.  There was a meal service, but strangely enough it was breakfast even though we took off at 1100 local time.  That flight landed right on time.

The Heathrow connection was straightforward, but with long lines at security checkpoints and a lot of secondary screening, so it took about one hour to reach the lounge after disembarking the plane.  The Seattle flight was 1 ½ hours late and there was additional secondary screening before we boarded, searching hand luggage.  The flight was 9 + hours long, with lots of coughing passengers and few face masks, but landing only about one hour late.  Clearing back through Customs and Immigration was swift, we were the only flight at the time and no lines.