Callao is the cruise port for Lima, Peru, our next scheduled destination.  It is planned for an overnight stop to give those guests who wanted to tour Macchu Picchu enough time to get to Cuzco and on the train to Macchu Picchu.

However, demonstrations across Peru, and especially in the Cuzco area, with dozens killed, have forced the cruise line to cancel all Macchu Picchu and Cuzco excursions.  Peru has declared a “state of emergency” in several areas, including Cuzco, Arequipa, Lima and Callao, restricting right of movement and demonstrations.  That has not stopped the people who want the current leader ousted.  The demonstrators have set up many roadblocks on major roads and railways, restricting normal movement.  The current president is the 6th one since 2018, and the first woman.

With that in mind, Miriam and I have chosen to cancel our excursions in Lima and may remain on-board the ship, although so far no tourists have been targeted.

The Pacific Ocean has been kind to us the last two days, with only minimal winds and a low to moderate swell on our bow.  There are lots of activities to fill the days and yesterday was a formal evening with a special “Chefs Dinner” with a 6 course fixed menu, quite good.  The weather is warm enough to spend time around the main pool and have most of our meals poolside at the Patio Grill.

The ship arrived in light fog which dispersed as we approached the entrance sea buoy and picked up the pilot.  The fleet of fishing boats anchored outside rolled heavily as the offshore swell moved into shallower water and built in height.

We docked in a industrial working port, but there were tents shoreside by the gangway with local handicrafts.  Patrick did ride the shuttle to Miraflores in the afternoon.  Miraflores is perched on top of steep cliffs overlooking the Pacific ocean.  The beaches below were filled with surfers, and one of the beaches was named “Waikiki”.  The shuttle stop was in the middle of the “Malecon”, a large park overlooking the ocean, with an upscale shopping mall built underground and down the side of the steep hill.  The mall was mostly upscale clothing shops and many restaurants looking out over the ocean. 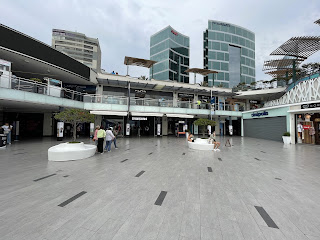 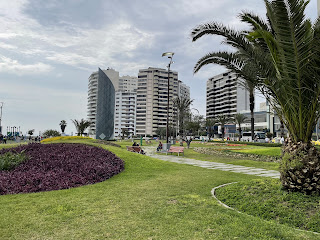 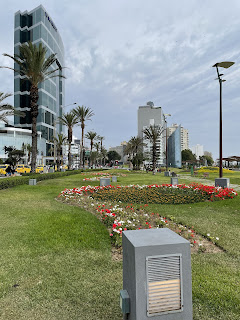 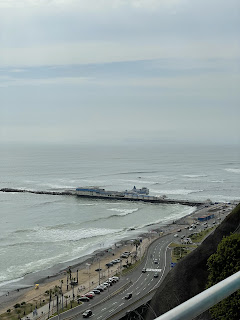 The shuttle passed though Callao, a much poorer area which looked pretty rough, with more garbage on the streets, and more boarded up storefronts.

Due to more demonstrations and more deaths, the ship has canceled all shore excursions, including the shuttle bus to Miraflores out of an abundance of caution, with guest safety in mind.  Passengers whose cruise ended here are still going to the airport and crew exchanges are still happening.  The ship’s staff are scrambling to provide additional activities for the guests.

Just one hour before departure the Captain made the announcement that all further Peru ports have been cancelled and the port of Callao has been closed to all inbound and outbound traffic.  We also cannot leave until all passports have been cleared out of Peru, so we don’t know when we can leave.