We got up relatively early and headed to breakfast on the patio above the pool.  Prices were sky high, but what choice do we have?

Patrick headed to CVS Pharmacy a few blocks away to replenish the items we had left home, like sunscreen, antibiotics, eye drops, etc., and then headed to the Brickell City Mall to look for a set of Studs for his formal wear.  He was successful in that quest.

After an afternoon nap, and clarifying our transfer arrangements to the ship, we headed to the Gala dinner, with about 100 attendees.  The entertainment was great and the food was good.  We faded about 21:30 and headed to bed, since the luggage needs to be outside the door prior to 0800.

We also tested again for Covid-19 and are still negative.  Good News!!

Baggage pickup was slow since the bellman told us there were over 500 bags to be brought down for transfer to the ship.  Our car was to pick us up at 11:30 and it was just before 11:00 before anyone showed up to get our luggage.  For some reason, since we had a private transfer, our luggage had to go with us rather than in the general luggage truck.  At least that way we knew the luggage would make it shoreside at the ship.

Check-in was straight forward, with the first checkpoint checking Covid-19 vaccination status and  negative test proof.  Then the next checkpoint looked at passports and took security photos.  The final checkpoint collected the passports.  We then were allowed to proceed to the gangway and board the ship, a long walk for Miriam since there was no wheelchair available.  By 12:30 we were in the Colonnade restaurant having a quick and small bite to eat.

The suites were available at about 1 PM, but luggage delivery was delayed.  We received our final bags after 5PM.  Once in the suite, the cabin attendants arrived with glasses of champagne and hors d’oeuvres and also notice of mandatory covid self test in two days.  We also have to wear masks while indoors on the ship for at least the next three days. 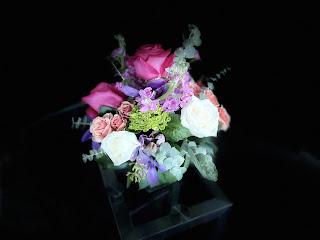 The flower arrangement in our suite

The ship departure was also delayed due to provisioning and luggage delays.  Seabourn Quest finally departed Miami after 7 PM while we we enjoying dinner at the The Grill by Thomas Keller.

This morning we woke to mostly sunny skies, with the wind at 17 knots from the SE and a moderate sea.  For most of the day we are paralleling the northern coast of Cuba, just visible off the starboard side of the ship.  Cuba blocks the direct route from Miami to Panama.  There is a lot of cargo traffic visible as well.  For a time we were apparently escorted by a Cuban naval vessel.  Our route takes us around the eastern tip of Cuba.  Apparently, on the way back to Miami, on the last day of the previous voyage, Seabourn Quest came upon a sinking vessel with 34 Cuban refugees headed for the USA, who were rescued and turned over to the USCG. 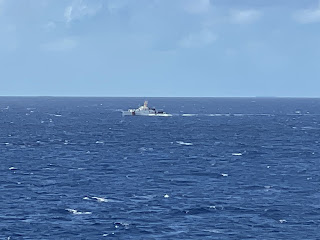 Getting our exercise in takes some time, the walking path on deck 9 is only 100 meters in length, so it takes about 80 laps to get the necessary 5 miles in.  There is a regular parade of walkers going round and round the deck.  Patrick reverses direction every 10 laps to unwind.

This morning the winds have changed direction, now from the NE, with a moderate swell on our stern and it is 81 degrees at 0600.  Patrick enjoyed a cup of coffee on our veranda as the sun rose above the horizon in a cloudless sky while Miriam luxuriated for a while in the very comfortable bed..  We have just passed through the Havana Straits between Cuba and Haiti and are headed directly for Panama.  There are ships on the horizon, but we can no longer see land.