Iquique is a larger city than Arica, but still perched on the edge of the Atacama desert, sandwiched between high barren hills and the Pacific Ocean.  The city was founded in the 16th century, but there is evidence of human habitation as far back as 7000 BC, by the indigenous Chango people who settled the coastline of the Atacama desert from southern Peru to northern Chile.  Chango is one of 10 indigenous peoples recognized by Chile and there is a remaining population of about 4,000 people.

Iquique was a prosperous saltpeter mining town in the 19th century, today it is a popular holiday destination with a tax free zone, a seafront casino and beautiful beaches.

The ship docked near the old town center.  There was a significant swell which was mostly protected by the sea wall, but no natural harbor.  However the ship was still rolling at the dock, but not nearly as much as the container ships anchored offshore.  There were also a number of Chilean navy vessels anchored behind the sea wall.  This port is often bypassed by cruise ships due to the swell at the dock, making it hazardous to tie up and disembark passengers. 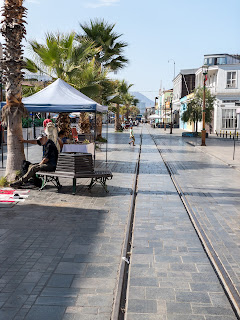 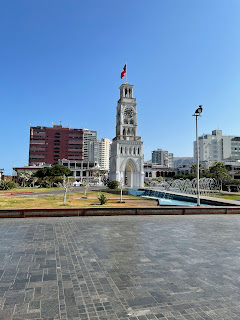 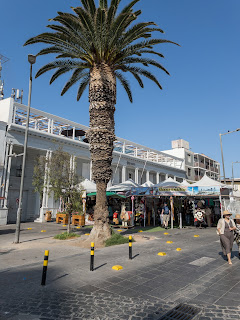 The shuttle bus dropped us at the main town plaza dominated by a 19th century clock tower and ornate theater, undergoing restoration.  The plaza and surrounding area is mostly a pedestrian mall with many pubs, restaurants and hundreds of street vendors selling stuff under canopy tents or even out in the open since there is seldom rain here.  We were cautioned against wandering very far from the main plaza due to high crime rates.

After an overnight transit in mostly calm seas, Seabourn Quest arrived at the port city of Antofagasta, some 700 miles north of Santiago.  Antofagasta is the capital of the province and region of the same name and has a population of more than 400,000.  Again, the city is at the base of steep barren hills spread out along the Pacific beaches.  The harbor is protected from the ocean by a seawall forming a space with room for perhaps six ships at one time.  The skyline is impressive, with many high rise buildings stretching for miles along the shore.  However, the slums stretching up the hillside reminded us of the favellas in Rio De Janiero.

Our shore excursion today includes the main Plaza Colon, a mining museum, then a 60 mile drive into the Atacama desert to the small town of Baquedano, an important rail junction with a number of well preserved locomotives used in the nitrate industry.  Mining is still practiced for things like copper and the tailings from the open pit mines are huge.  The rail lines are still in use. 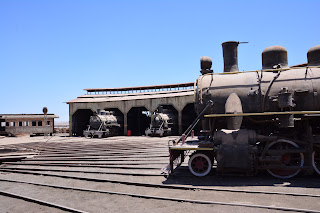 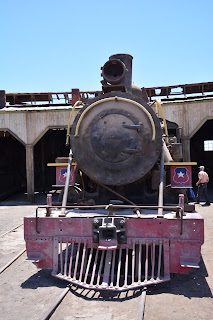 From that town we went to Chacabuco, one of a number of purpose built towns constructed in 1920’s for the workers in the nitrate plants which accounted for 50% of Chile’s GDP at the time.  When that industry collapsed after only 14 years, the towns were abandoned and fell into disrepair.   The Pinochet government used Chacobuco as a concentration camp for some 1800 political prisoners from 1973-1975.  It is now a “ghost town” with a grim past and a tourist attraction.  The German government is funding the restoration of some of the old buildings.  The town is really grim, with collapsed buildings, barren dirt streets and no water.  Ocean Falls in British Columbia looks like an oasis compared to Chacabuco. 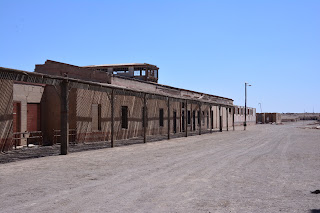 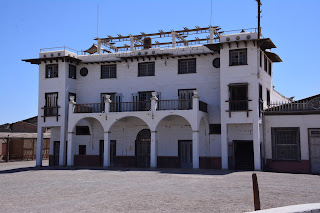 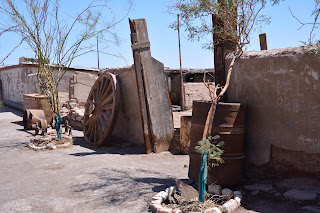 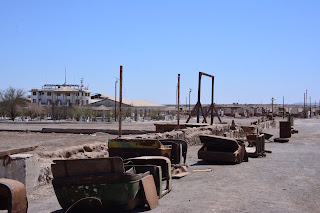 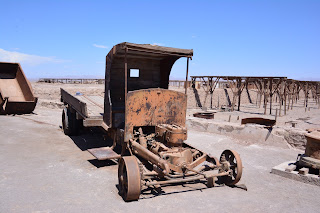 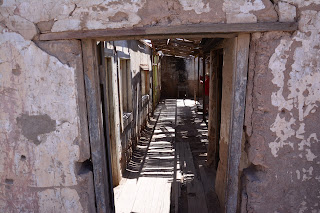 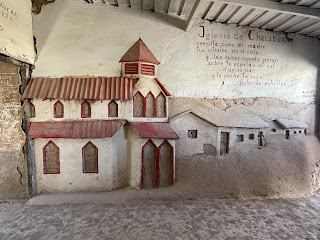 Returning to the ship we had a nice dinner at the poolside patio grill followed by a dance party around the pool as the ship departed at 11:00 from Antofagasta and nosed out into the gentle pacific swells.  We are  headed for San Antonio, one of the port cities for the capital of Santiago.