Seabourn Encore approached the dock in pre-dawn darkness, without even a sunrise due to clouds on the horizon.  Our tours today included the Virgin Mary’s House, the ruins of Ephesus, rug weaving demonstrations and a private classical concert for Seabourn on Harbor Road in front of the Great Theater at Ephesus. 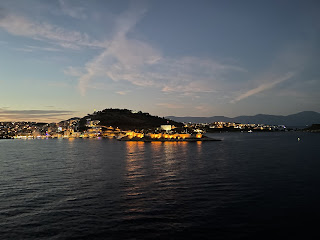 Approaching Kusadasi at Dawn with the Turkish Fortress lit up

Miriam and I were last here in 2008 as part of our Holland America transatlantic cruise.  Since that time the Virgin Mary’s house has been declared a Unesco “World Heritage” site and much development has taken place around the actual house.  The original ruins only went up a few feet above ground and the building that is now there is only 25% original and 75% reconstructed.  The line is clearly visible.  Like many of the sites, no photography is allowed inside the shrine. 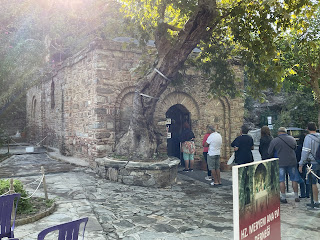 After a short visit before most of the hoards of visitors arrived, we headed to the ruins at Ephesus.  Not much has changed except the crowds were even larger.  We walked down through the ruins to the Great Theater and Harbor Road, past the Celcus Library façade.  We were able to discern carvings of the goddess’s  Nike, Medusa and Artemis.  The guide talked about how St Paul did not actually talk in the great Theater but rather in the Jewish Synagogue next to the library.  In ancient times, Ephesus was a large and important seaport with as many as 250,000 residents, but earthquakes and filling of marshlands to combat malaria which covered the city under many feet of debris means the Harbor Road is now miles from the sea.  The site is still only 10 percent excavated, but radar and lidar surveys show extensive ruins buried under the hillsides on both sides of the city. 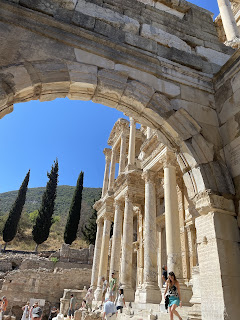 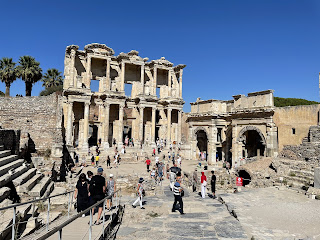 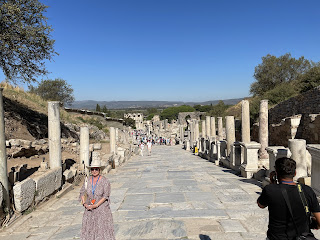 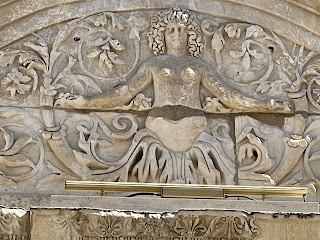 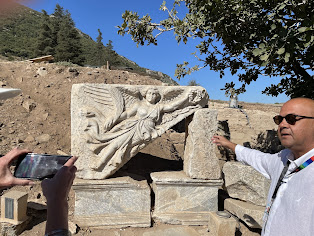 The goddess Nike, can you see the swoosh?

Finishing our tour, we headed for a hand knotted silk rug weaving demonstration and sales pitch to buy rugs before we returned by foot through the Grand Bazaar to the ship.

After an early dinner, most of the passengers, including us, boarded buses starting at 6:40 to return to Ephesus and a private classical music concert in front of the Great Theater.  Harbor Road has been walked by St. Paul, Mark Antony and Cleopatra and many other famous historical figures.  Tonight it was lit up with candles and set with tables for us listen to the chamber orchestra as we sipped wine.  To be in that setting walking that same road knowing the amount of history that preceded us was somewhat sobering and exciting at the same time.  The distance into the concert setting was too far for Miriam to walk unaided, so the ship arranged a wheelchair transfer from the gangway to the concert and return. 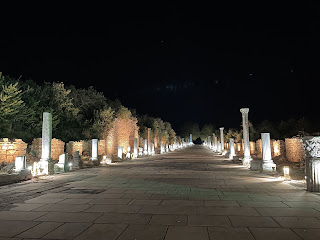 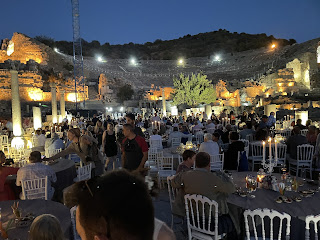 Our concert setting in front of the Great Theater 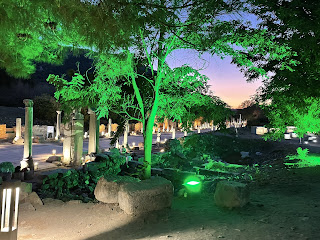 The night lighting was spectacular 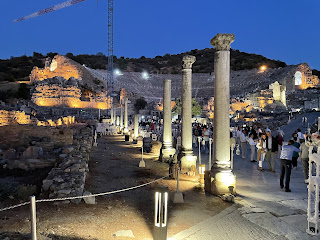 The concert venue on Harbor Road 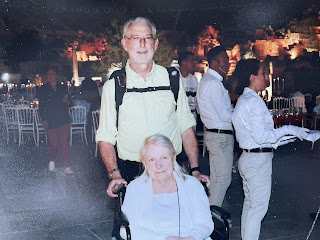 Miriam and Patrick at the evening concert at Ephesus

The evening was stunning with the setting and the lights, something not to be missed.  Returning to the ship, the ship’s wheelchair was delivered to the wrong port entrance so Miriam walked all the way from the port entrance to the ship, where much of the crew were on hand dockside, singing and dancing to welcome the passengers back from the concert and to join the dance in progress on the pool deck.