The ship arrived at Ny London in Kongfjorden on schedule and Patrick was one of the kayakers who practiced paddling through brash ice coming off the nearby glacier.  Ny London was the site of a failed marble mining operation 100 years ago.  The marble turned out to be so soft and brittle it had no commercial value.  The remains of the mining equipment are still visible.  There a two cabins which are vacation cabins for people who live across the fjord in Ny Alesund, which is primarily an arctic research facility.  We were able to take a guided hike around the island. 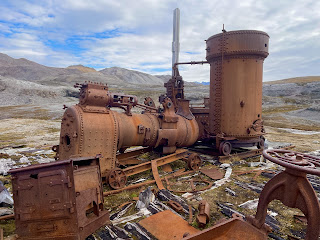 Following the morning visit, Seabourn Venture proceeded further up Kongfjorden fjord to the end where two separate glaciers meet with a glacier face several kilometers long.  The glacier is very active and was calving every few minutes with thunderous roars.  Guests and some crew piled into zodiacs for up close views.  Patrick chose to kayak around the smaller icebergs and then the kayakers also took a zodiac ride close to the glacier face.

Our early morning destination at 0700 was Poolepynten, the first location we attempted to visit in Svalbard on the first voyage.  We were looking for a Walrus haulout and this time there were a few on the beach, plus one solitary young male further down the beach.  The kayakers headed even further down the beach to avoid an encounter with a walrus in the water, which could be risky.  We did see some wildlife including wild reindeer and barnacle geese.  Following the kayaking we headed into the beach for a close up view of the walrus haulout before heading to our afternoon destination of Alkhornet, a massive promontory on the channel leading into Longyearbyen where a technical stop was planned for early evening. 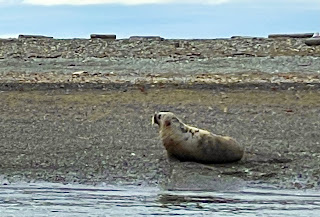 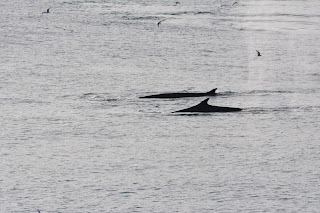 Some of the dozens of fin whales 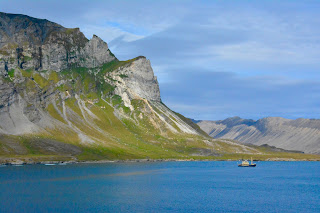 On the way in we spotted a number of fin whales feeding with clouds of seabirds overhead.  The swell was running 3-4 feet, long period, but made beach landings impractical for guests, so the stop was canceled and we headed back out into the main channel and were treated to a massive display of fin whales spouting and lunging through bait.  The ship stopped and we spent over an hour with the veranda door open listening and watching the spectacle, with the whales approaching to within a few hundred feet of the ship.  Fin whales are the second largest of the whales, surpassed only by the massive blue whale.

We reluctantly turned back to Longyearbyen for the technical stop and by 8PM had completed the stop and headed southwest from Svalbard into the Greenland Sea.  We will be at sea for two days before arriving at Jan Mayen Island, belonging to Norway.  It has a weather station and used to also have a Loran-C station.