After two days of relatively calm seas and overcast skies, and finally sunset and sunrise as we head southwest, we arrived at Jan Mayen Island at 0700. 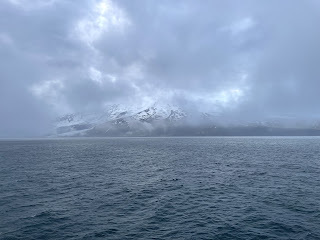 Jan Mayen Island has a weather station with about 18 residents and is about 56 KM long.  There used to be a Loran-C station also.  The Norwegians claim Jan Mayen Island as their territory, the furthest west, and almost as far north as North Cape, at 70 degrees 58 minutes North.

The weather was not promising, with 1-2 meter swells and 15 knots of wind.  The volcano peak was mostly shrouded in clouds and we only got brief glimpses of the highest peak in Norway and the northernmost volcano in the world and the only volcano in Norway, sitting right on the mid-atlantic ridge.

We were positioned in a bay on the northeast side of the island.  There was a sailboat anchored in the relatively shallow bay named Kvalrossbukta.  Seabourn Venture used dynamic positioning and a scouting team was sent out in a zodiac to assess conditions.  Conditions were favorable for landings and kayaking, but not for submarine operations, so Patrick went kayaking and then for a walk on the island.  There were puffins in the water while kayaking, a pleasant surprise, and more puffins nesting in the volcanic rocks, but only visible via a telescope.  We were fortunate to have occasional views of Beerenberg, (Bear Mountain) the volcano, but it was mostly in the clouds.  The black volcanic sands were everywhere and reminded us of Hawaii, only 50 degrees colder.  The volcano last erupted in 1985. 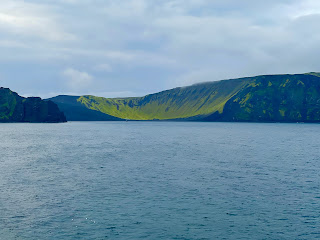 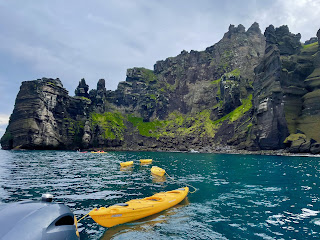 Our kayaking cove with puffins

About noon the ship had recovered all the zodiacs and set sail for Cape Brewster in Scoresby Sound, Greenland, where we arrive tomorrow afternoon.