As expected, the winds and seas increased overnight as we approached our next wildlife stop, Akpatok Island, which has more than one million Brunnich’s Guillemots nesting and breeding in crevices in the 800 foot high limestone cliffs.  The island is also home to walruses and polar bears.

With the seas at 2-3 meters and sustained winds to 35 knots, the captain cancelled the planned zodiac expeditions due to safety considerations in launching, boarding and retrieving the zodiacs.  The 38 degree temperatures combined with the winds made for chilly viewing as the captain substituted scenic cruising several miles off the beach for 2 hours.  There were purportedly 2 polar bears on the beach, but our enlarged photographs showed only light colored limestone rocks which had fallen from the cliffs.  We headed for our next stop, Happy Valley-Goose Bay, two days away.  As we cruised back out of Hudson Strait the ship motions and shuddering increased for a while as the winds continued to build.

We were treated to two more impromptu lectures, one on Inuit art and one on killer whales and the impact on the arctic as the whales range further north in search of prey.  Finally, near evening we turned the corner back into Davis Strait and paralleled the Labrador Coast.

About 0200 we briefly watched the Northern Lights under clear skies.  Unfortunately, they were faint and not much color, impossible to photograph from a moving ship.

Dawn brought sunny skies and cool weather, with the coastline in the distance on the right and a steady parade of icebergs as we continued our journey.

There are three lectures today, one on ocean trash, one on Arctic Seabirds and finally, a presentation by Trevor Potts and his amazing recreation of Shackleton’s voyage in 1993 in a similar open boat with no liferafts or other support equipment.  The boat is now on permanent display in Cambridge, England.

The clear but cool weather we enjoyed yesterday has been replaced by wind, low clouds and rain as we continue to make our way to Happy Valley-Goose Bay.  We are out of Davis Strait and in the Labrador Sea.  Later in the day the rain was replaced by fog, so once again we hear the foghorn going off every two minutes.

The fog lifted as we approached the entrance into Lake Melville, a large tidal estuary where Happy Valley-Goose Bay is located.  The ship picked up a pilot and proceeded into the relatively narrow entrance.  As we transited the entrance we were treated to the sight of three Orca splashing alongside the ship.

By dinnertime, the rain returned and continued throughout the night.

Seabourn Quest continued the 100 nautical mile journey up Lake Melville overnight and docked at the Port of Goose Bay shortly before 0800.  Rain was expected to continue most of the day, with mild temperatures. The dock is about 5 miles from the Happy Valley town center and several miles from the airbase at Goose Bay.

We had selected a shore excursion to the town of North West River, which is literally at the end of the road system in Labrador.  Until a bridge was built in 1981 the only ways to get to North West River were by boat or a cable car spanning the river. 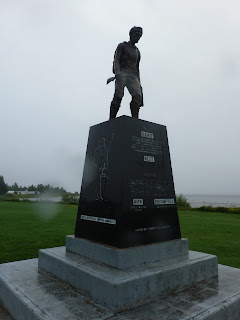 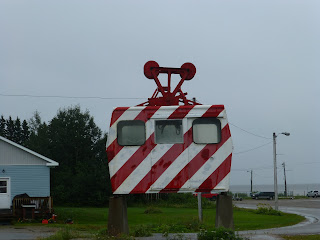 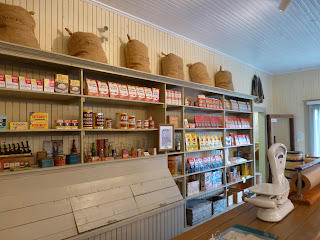 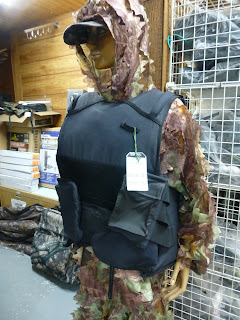 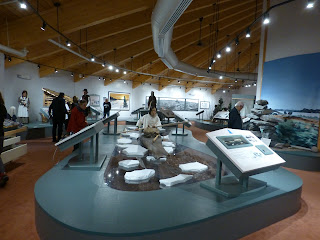 Part of the Labrador Interpretive Center 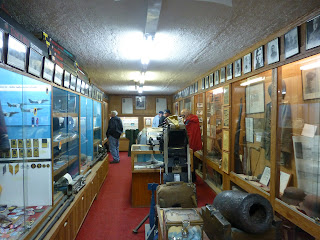 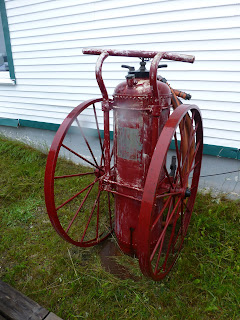 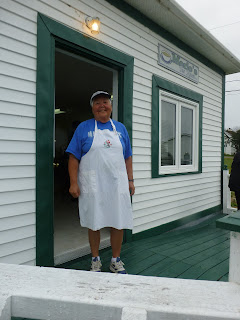 After wandering through the displays we walked for several blocks, some on a re-creation of the old boardwalk, to a little café where the local Inuit ladies had prepared a lunch of soup, sandwiches and desserts, all home cooked.  It was a delightful experience as we learned what life was like in the small town of 500 people from the people who actually live there.  After lunch we travelled by bus to the Labrador Interpretive Center, going down a road called “Airstrip Road” since it started as an emergency airstrip.

The interpretive center was well done and had lots of information on the different peoples who have lived in Labrador, going back 10,000 years, plus a special focus on the transition in recent years from a barter economy to a wage economy and the restoration of Inuit lands and rights.

North West River is also the location of a Canadian Discovery Channel reality TV show appropriately called “Last Stop Garage” and one of our guides has a brother who is in the show.

Following the tour at the Labrador Interpretive Center we were given a short detour to Happy Valley and the Northern Lights Military Museum, a private collection in the basement of the “Northern Lights” store (formerly a Hudson Bay Company Store) that stocked a little bit of everything from clothing, camping, guns and souvenirs.

Returning to the Seabourn Quest, the sun finally came out and many local inhabitants lined up in their cars to wave us off, sounding their horns while our Captain replied with the ship’s horn.